Warning: Use of undefined constant WPLANG - assumed 'WPLANG' (this will throw an Error in a future version of PHP) in /homepages/20/d280093465/htdocs/clickandbuilds/UXME/wp-content/plugins/similar-posts/similar-posts.php on line 557
 Class: Week 3 – Persona Presentations and Sketch Workshop | UXme 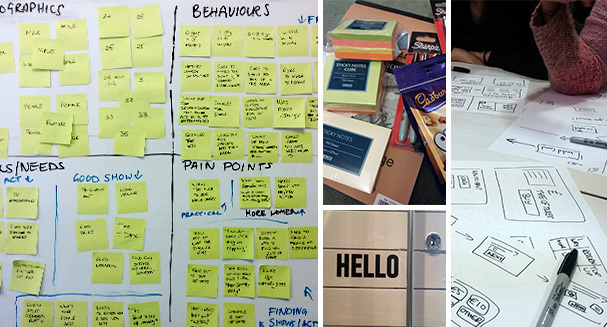 This week started with 8 of us giving a presentation about our user research and personas.

I had split my 10 user interviews into 2 personas, the Casual Fan and the Comedy Enthusiast. There was quite a bit of crossover between the two but one major thing to note is that the Casual Fans get recommendations from friends, while the Comedy Enthusiasts seek out these recommendations themselves (from comedians on Twitter, from Facebook invites, and from keeping up on trends) and then they pass that on to the casuals. 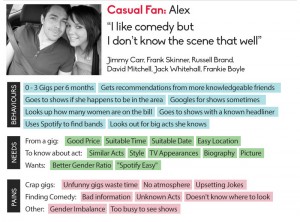 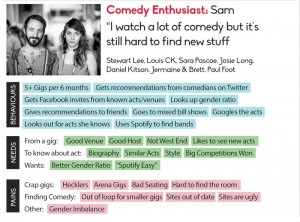 In my presentation I talked through my research process, how I’d changed my project, and I looked in detail at the different things I’d discovered about Demographics, Behaviours, Needs and Pain Points of comedy fans.

I enjoyed talking through my process but it was kind of weird for me to stand in front of a crowd and talk for 10 minutes and only get one or two little laughs. I’m used to performing comedy so not getting laughs was a strange feeling for me! I felt like I was ‘losing the crowd’ but, afterwards, people said they found my presentation interesting and useful which was nice! 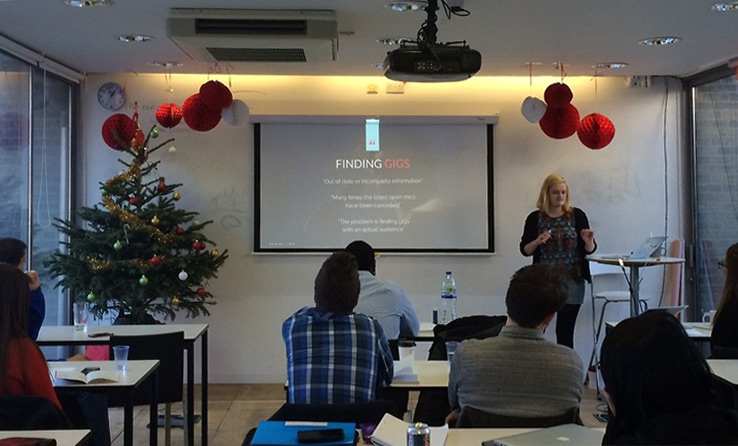 It was also great to get feedback on my homework from Sarah, one of the TAs. She pointed out that it would have been good to include some scenarios, which is something I hadn’t thought of, and I will definitely be adding that, as I think it would be helpful in developing my project.

In the second half of the class, we learnt about sketching. We looked at some of the benefits of sketching out ideas: it’s quick, disposable, stops you falling in love with your ideas and it’s a good way to communicate things simply. It’s also really accessible, anyone can pick up a pen and do a little sketch. Joe told us a story about two groups of potters. One group is told to design the best teapot ever, and spends all day working on it. The other group is told to design as many different teapots as possible. The second group ends up coming up with a better teapot. Their ideas were flowing all day while the first group would get caught up on trying to be “perfect”. That clogs up the creative process. 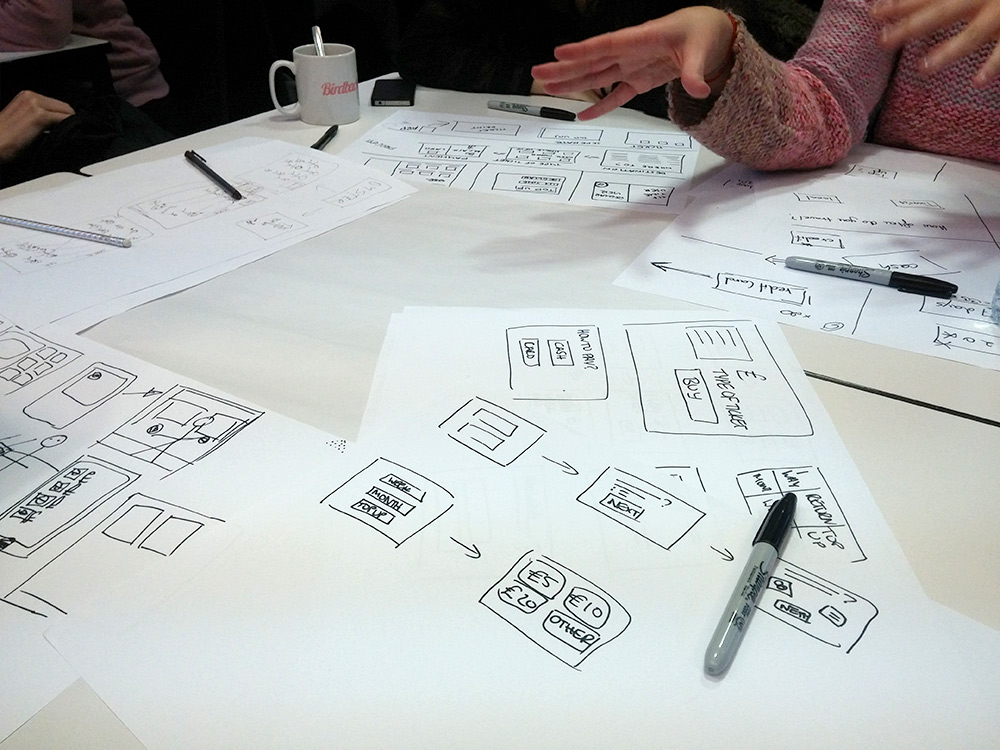 We were given a little exercise to redesign the TFL ticket machines. We had 5 mins to sketch as many ideas as possible, then we spent a while talking through our ideas in groups. We came up with lots of different ideas and it was useful to sketch but also to talk about the sketches.

It was a difficult exercise because there is so much to think about with the ticket machines. Does the user already have an oyster card? Are they a tourist? Do they only need a paper ticket? There are a lot of needs and different scenarios. We didn’t think those through, we just jumped into sketching solutions for the UI. I think this is a good way to get creativity flowing and start thinking up ideas and I think it would also be useful to do some kind of sketching or brainstorming around the problem. 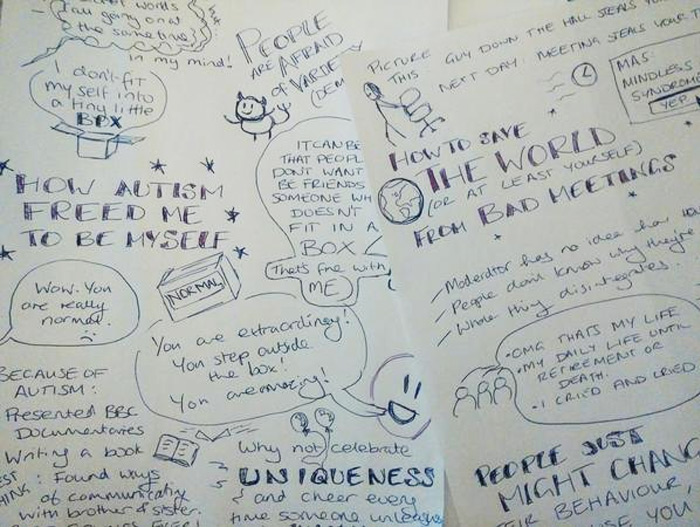 I use sketching a lot lately, I have been trying out sketch noting which is a way of taking notes that include sketches. I can’t sketchnote fast enough to do it in class but I’ve been practicing with TED talks and also writing out notes from class with sketches added when I get home. It’s really helpful because it makes my notes more engaging to look at. When I was working on my homework and had to check things back in my notes, it was easy and interesting to find the information I needed in my sketchy-notes.

I’m still really happy with the feedback and response I’ve been getting to my the idea for my comedy app project. For homework this week, we have to write out a problem statement (i.e. the problem we are trying to solve) and project brief (i.e. proposed solution and features). I’m going to do some brainstorming and sketching to start thinking about this, and I’ll put up a blog post about it during the week. 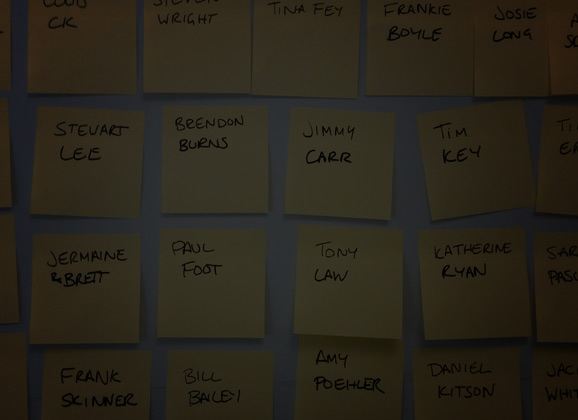 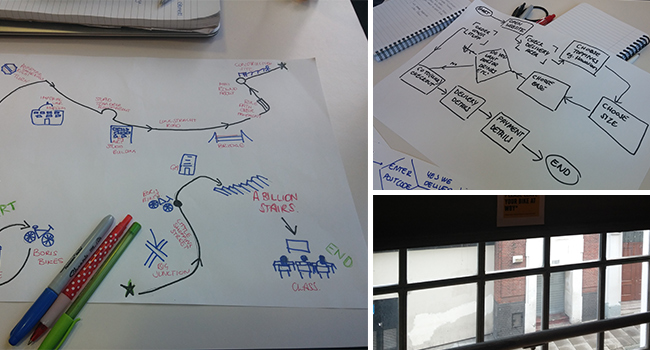 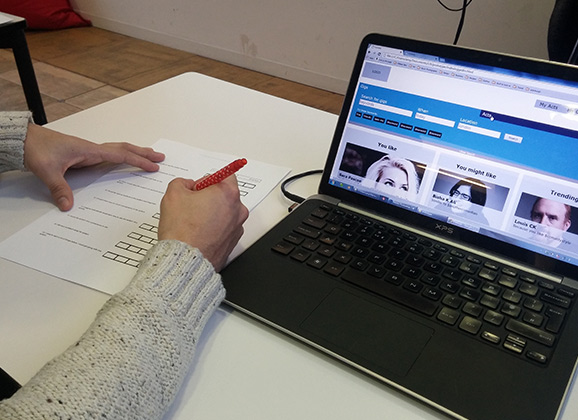 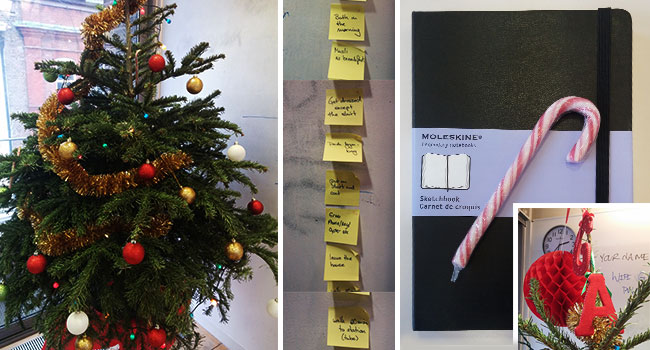